WELL ACTUALLY SINCE YOU ASKED:

- Starbucks actually did the hard work of figuring out how to donate perishable food in a foodsafe way.

- 500 elephants were relocated to a better, safer and bigger home.

- “Unadoptable” cats (who are usually killed) may have a really important place in the world in their traditional area of work, given we’re thinking maybe poisoning stuff all over the place is a bad plan.

- We made massive strides in Alzheimers’ prevention.

- We found out that the ozone layer is repairing itself and that all the work we did to get rid of those aerosol chemicals was actually worth it.

- This therapy could cure radiation sickness.

- The Anglican church resolved to solemnize same-sex unions the same as opposite-sex unions, which required a super-majority of all three orders of the church (lay, clergy, bishop) and got MORE than that from both lay and bishop.

- The Rabbinical Assembly issued a resolution affirming the rights of transgender and non-conforming individuals.

- The Liberal gov’t changed the Canada Child Benefit so that it’s actually helping people who NEED THE FUCKING HELP. (I am sorry if you are a six figure income you do not actually fucking need this make some fucking lifestyle adjustments for fuck’s sake.)

- Highway of Tears is finally getting some regular fucking bus service.

- We have developed gene-therapy for autoimmune disorders.

- Precision treatments for cancer are hitting clinical trials and WORKING.

- Dentists are once again providing free care to veterans who need it.

- The Anglican bishop on the Islands made an Eastern pilgrimage walking from Alert Bay to Victoria to stop at every First Nations community and personally, unequivocally apologize for his church’s involvement in fucking them up.

- Canada is actively attempting to increase and improve refugee resettlement.

- It has been determined that the manatee population has bounced back so much (500%) that it can be moved from “endangered” to “threatened”.

- This guy got to see his kids again.

- The Orlando Shakespeare Festival showed up with angel wings to block funeral-goer’s view of hate group so they wouldn’t be disrupted.

- Net Neutrality has been upheld by the appeals court. (No that fight isn’t over BUT THIS IS STILL A FUCK OF A GOOD THING.)

… . and this is just what I came up with in a pretty lazy google search in an hour, including distractions where I went down the research rabbit-hole for a bit because holy crap some of that stuff’s NEAT, guys!

And I know I’m missing stuff, because I wanted a citation for every single thing I put on there.

Yes, there have been some really bad things that have happened in 2016. There have also been a number of huge fucking miracles, and SIMILAR bad things have always happened, just about every damn year - maybe not to you, or maybe they didn’t make the news, and maybe you just don’t remember any of the good because of that whole massive Negative Bias problem that human brains have, but?

A lot of good shit happened. A lot.

And like I do actually get the sudden overwhelmed feeling of EVERYTHING SUCKS? but that mindset is, at this point, literally our worst enemy. “Everything is terrible somebody do something” helplessness is what will in fact consign us to everything BEING terrible. 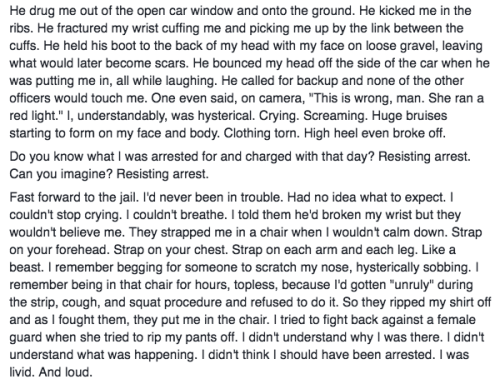 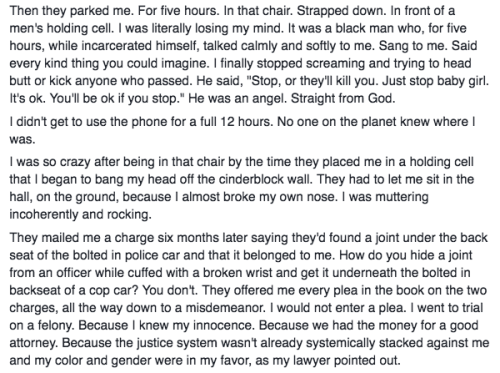 Molly Suzanna shared a story on Facebook that she had never told before: when she was 19, she ran a red light while crying, then was pulled over and forcefully removed and beaten by a police officer. She explains in the letter that she believes her situation would have been even worse had she been black — and she ends the letter with an important call to action. I gotta tell you guys this wholesome joke I heard today:

Okay so there’s this guy driving a truck full of penguins around town and after a time a cop pulls him over. The cop says “Hey! You can’t just ride around town with those penguins! Take them to the zoo!” And the guy is like okay

The next day the cop is on patrol and he sees that same guy with his penguins in the back of his truck yet again. The cop pulls him over and says “Hey! I thought I told you to take these penguins to the zoo!!” And the guy goes “I took them to the zoo yesterday, officer. Today we’re going to the movies!”

mutantlog
reply
But how much do I save for beating the mob in 1 vs 100 Live?
Waterloo, ON I've been a fan of cartoonist Ellen Forney for years, and Marbles: Mania, Depression, Michelangelo, and Me: A Graphic Memoir

is a tour de force graphic memoir about mental illness. Check it out!

(What's the deal with these links? Click here for info.)

Crock may be the only comic that I’ve antagonized so much that they felt a need to do a genuinely mean-spirited strip about me, but at least I am familiar with long-running Crock jokes and traditions, which is more than I can say for the people paid actual money to help produce it for publication. Captain Preppy, for instance, is an egomaniac who likes to gaze at himself in a handheld mirror while talking about how great he is. This is well-established Crock canon. Yet somebody looked at a black-and-white version of today’s strip and said, “He’s a holding a corndog, right? Looks like a corndog. Let’s check out the dialogue in panel two. ‘Boy, am I lucky.’ Yep, that’s the sort of thing that someone holding a corndog would say. God, I wish I had a corndog right now! Anyway, paintcan tool, pick corndog brown off the color chart, bloop, bloop, bloop. Done! On to Curtis! Wonder what he’s eating.”

Haha, Mrs. Chubb folded immediately after like 30 seconds of fairly mild questioning from Sam. Just goes to show that if you’re going to run a sordid fake-accident-injury scam, do not enlist as your accomplice a woman for whom pearls are part of her casual, lounging-around-the-house wear. She will be far too classy to commit.

Jesse Ventura ran for governor in 1998, which I guess offers some solid evidence for when the current run of Archie strips were originally written. I certainly hope that nobody was misled by this strip into thinking that Greco-Roman wrestling was a flashy, high-profile road to fame and eventual political glory.

“Hmm, what should I wear for my first day of class? I know: pants, a suit jacket, and a vest, all precisely the same shade of green!” –A guy who thinks about art and aesthetics, like, professionally

This post, "Coloring crappiness", originally appeared on
The Comics Curmudgeon, which is the best blog on the Internet.

mutantlog
reply
Oh, I can't stop laughing about the corn dog.
Waterloo, ON